Moving up levels and the bot fly incident

So I've always got the best intentions of restarting this blog but it doesn't always work out like that and it seems that i forgot how much time and effort I put in to this blog but that doesn't mean I'm going to give in trying.

After my Last blog post magic had some unplanned time off. I'm sure that some of you will remember that i was training to do my bhs stages and become a freelance from well all that hard work paid off and I finally have my own business doing exactly that. Unfortunately after my Last post things got crazy busy for me and I ended up with a very poorly two year old as well as working some pretty long hours. I don't think magic was two bothered by the time off though. 😂😂

Fast forward and Jax is now feeling much better and work had been slightly quieter which had meant that i have had more time to spend with magic. We've had 2 really good lessons since my last post both of which have been working towards our next dressage competition where my riding coach and i have decided it is time for magic and i to move up the levels. Up until now magic and I have only competed set intro but we are now making the move up to preliminary and we are excited but nervous. The last 2 lessons that we have had we have rode through a couple of tests to start getting the feel for what competing at preliminary will be like and while it hasn't been a complete disaster we have a better understanding for the things that we need to work on and that is mainly improving the amount of time we can spend in canter and the quality of our canter work. All things that will come together naturally at both magic and myself become fitter. 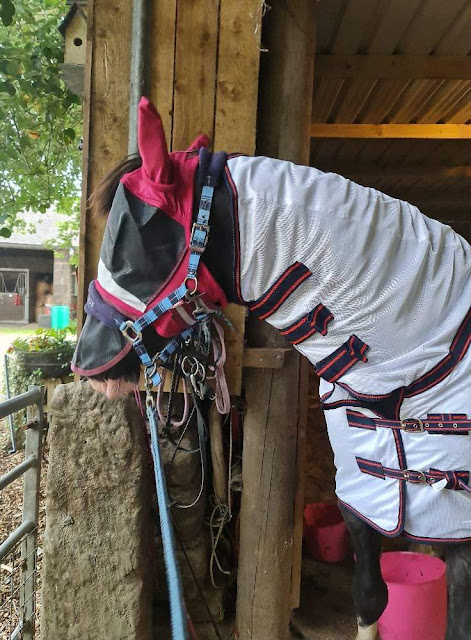 Next up in our busy week came the bot fly incident. I'd just popped up to see magic and had been planning on having a little bare back ride but when i got to the field off war quite clear that magic was feeling very distressed, he was running around bucking and kicking, just going mad. It turns out that this was magics first experience with bot flies and it's safe to say that it was not a pleasant experience. When I was finally able to get hold of magic, I decided that the best course of action would be to bring him in cover him in fly spray and get him comfy. I then went on a mission to find him a fly rug and fly mask the first time he's ever had to have one in all the years that I have owned him and of course we needed a bot knife to get rid of any eggs then in September he will also have a wormer that also covers him for bot eggs. Magic was so good having his fly stuff put on for the first time and it was almost like he knew it was going to help him. Touch wood up until now he's kept it all on and I haven't had to play the where has my fly mask gone game. Magic is now enjoying days in and night times or with his friends and I feel like it is doing him some good to not always be out with his friends and to come in on his own sometimes. 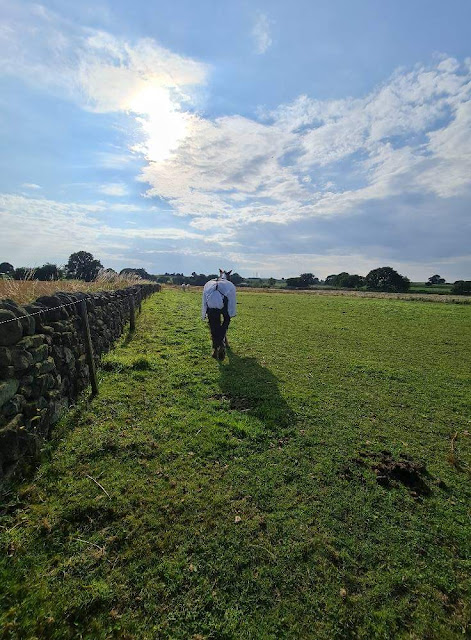 Over the next few weeks work will start to slow down a little bit more and I will find a better balance including magic time. I'm going to try and be more regular with blogging too and hopefully get this blog back to the way it used to be so for any new and old followers please do bare with me.  I look forward to having you all come along on the crazy life that I live.

Popular posts from this blog

January 09, 2018
Okay so this post has taken me a while to post for several reasons but the main one being just how angry this woman has made me.  For those of you that have been following my blog for a long while you will know that back around October of 2016, I was introduced to a woman called Nicki Williams, she was a friend of a friend that was supposed to be opening a centre for rehoming and rescuing animals, but also for horses working with soldiers that has PTSD. We hit it off straight away and came what I thought to be good friends. However warning bells should have probably rang sooner. By January or February of last year the horses that I had agreed to look after (that she had got on loan) Bella and Arthur, she was being threatened that she would have them taken off her by the control of horses act, because she hadn't been paying the rent for the field. Although Nicki reassured me that she had done, she even showed my 'payments' that had been made to Angie. I ended up getti
23 comments
Read more

August 26, 2014
hiya guys well it's been a few days and I was planning on updating you all today. Unfortunately I won't be able to go in to as much detail as I want to because I am having problems typing because it looks like for the third time I have broken my hand again!  In the exact same place, how rubbish is that? But they can't tell me because it will not show up for another two weeks on an X-ray so at the minute it's back in a splint and I've got to go back to hospital in two weeks.  Well Saturday I got to ride Gatsby again. We have been working on getting him in to an outline more consistantly but it took me seeing Fiona riding Pumpkin Pie for me to know what it was that I needed to do for Gatsby to work properly in to an outline. We got some really good work in the walk and trot (I have got pictures) and slowly we are starting to get it in the canter as well but by the time we move on to canter I tend to feel quite tired and weak on my left side. We did an exercise th
1 comment
Read more

February 12, 2018
Well I am finally in the new house and settled in but at the moment I am too tired and aching to right a proper post, so I'm curled up with a hot chocolate the soaps on and of course the two pooches. So I thought that I would share these two videos of magic with you. Enjoy the videos and i'll be back to regularly blogging recently! Even enjoy Magic's naughtiness it's safe to say that while it was fun to see him having some character he was a complete pain in the ass! Amber, Casper, Diesel and Magic
1 comment
Read more